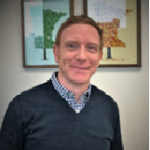 Sean Burke is the Public Policy Director at the Minnesota Elder Justice Center. Sean has extensive experience and understanding of the complexity of issues facing older adults including abuse, neglect and financial exploitation. Before coming to the MEJC, Sean served as an Equal Justice Works Fellow with the Senior Law Project at Mid-Minnesota Legal Aid, and as an attorney with the Minnesota Disability Law Center. He holds a law degree from the University of Minnesota. When he is not working as an advocate for older and vulnerable adults, Sean attempts to keep up with his twin toddlers.